Posted on 9th March 2017 and written by Dengie Feeds

The Hannah Francis Award for Talent, Courage and Inspiration was created to honour Hannah for the bravery she showed throughout her battle with cancer, during which time she founded the Willberry Wonder Pony charity to raise money for bone cancer research and to grant equine wishes to seriously ill people.

Nominations have now opened for the 2016 Award, which will be presented annually to an inspirational and talented Pony Club Member who has overcome adversity or carried out an act to help others.

An active and popular Member of the Wylye Valley Pony Club, the Award was presented in December 2015 to Hannah who humbly thanked those involved including her Pony Club Area Representative Louly Thornycroft.

Speaking about the Award Louly said: “The Hannah Francis Award for Talent, Courage and Inspiration is a fitting tribute to her, and just one of many ways Hannah’s legacy will be remembered by those within The Pony Club. Hannah’s courage was utterly amazing. She showed bravery and focus in setting up the Willberry Wonder Pony charity for the benefit of others, despite facing her own enormous, unimaginable challenges.”

The Pony Club is now looking for nominations for the 2016 Award which will be presented at the Dengie Winter Championships in April. The recipient will be presented with a statue of a Thoroughbred horse head which was chosen because of its meaningful expression; gazing, ears pricked, into the future.

Nominations for The Hannah Francis Award for Talent, Courage and Inspiration are welcomed from Pony Club Branch or Centre Officials who have a Member showing willingness to learn and develop, through The Pony Club, into a talented horseperson and fitting one or more of the criteria listed below:

Nominations should arrive no later than 17 March 2017 and be addressed to Sarah Baker, The Pony Club, Stoneleigh Park, Kenilworth, Warwickshire CV8 2RW. Posthumous nominations are welcomed.

As was Hannah’s wish, The Willberry Wonder Pony charity continues to raise money for the vital research of osteosarcoma; a comparatively rare and low profile form of bone cancer which attracts little funding for research. Funds raised also grant ‘Willberry’s Wishes’ giving seriously ill people and their families unique and memorable equine experiences; an initiative developed due to the inspiration Hannah drew from riding and being around horses throughout her treatment.

Miles Toulson-Clarke, DC of the Wylye Valley Branch and a trustee of Hannah’s charity, said: “Hannah was a quite extraordinary person. Not only was she an exceptionally talented and dedicated rider, she was an equally skilled coach and had started to teach a number of our Members. She showed the same aptitude at conveying her knowledge to others as she demonstrated when in the saddle. Hannah’s talent, courage and inspiration were most evidenced during her battle with this terrible disease. Her creation of Hannah’s Willberry Wonder Pony charity says everything about Hannah herself – she was always thinking about others. We’re determined to fulfil her legacy and have been amazed by the response from the equestrian community, having raised over £500,000 in under a year. This and our future fundraising efforts will reinforce Hannah’s determination that others contracting osteosarcoma can face a much brighter future.”

Louly Thornycroft, commenting on Hannah’s talent as a rider which saw her represent the Wylye Valley Branch at The Pony Club Championships in 2014, said: “Shortly before her diagnosis, Hannah’s talent and ability to progress was recognised by a selection panel which chose her from a number of applicants for a place in the Pony Club Rider Development Pathway Squad.”

Chairman of The Pony Club Training Committee William Blane was a member of the selection panel. He described Hannah as being ‘extraordinarily talented’ and remarked that she attended the event where the final trial was held on crutches; an example of her willpower and determination. 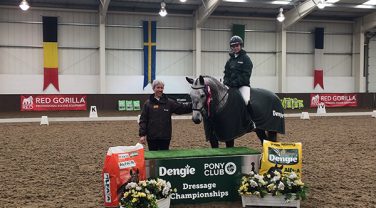 The 2017 Pony Club Dengie Winter Show Jumping and Dressage Championships returned to Addington Manor Equestrian Centre, Buckinghamshire, on 01-02 April 2017. The hotly contested Championships acted as the pinnacle of the Dengie Winter League for Pony Club competitors, who have taken part in qualifiers during the winter months.