Posted on 20th April 2017 and written by Dengie Feeds

The hotly contested Championships acted as the pinnacle of the Dengie Winter League for Pony Club competitors, who have taken part in qualifiers during the winter months.

Saturday kicked off with Dengie Winter League Dressage and the Tubtrugs Dressage to Music classes, which saw pairs and individuals strutting their stuff to their favourite tunes.

At Intermediate level Olivia Hoyland (15) took the win for the Ridgeway Branch, riding Mis Fantastic to clinch the win with 77.90%. Anna Czylok (16) and Curolea Mika came second for the Cambridgeshire Hunt with a score of 74.19%.

The Open Championships were equally competitive, but it was Garth Hunt’s Annabella Pidgley (12) who finished on a score of 73.38% riding Farbenfroh to clinch the win. Rosie Boulton (20) and Dino 391 took the runner-up spot with a score of 73.16%. Annabella said: “It feels really good to win as all of our hard work has paid off.”

The Open Individual Freestyle Dressage to Music class was won by a surprised Katie Branley (19) with an impressive score of 74.11%. Katie and her horse Buntino finished just ahead of Anna Bates (14) who rode Jolianna to second place for the Braes of Derwent South Branch, finishing on 73.21%.

Cambridge University student Katie hadn’t been able to practice as much as she had hoped, but she arrived at the competition thinking ‘just go and make it happen’ and this positive attitude certainly successful.

It was a 1st and 2nd for the Meynell Hunt in the Intermediate Individual Freestyle Dressage to Music competition. The win went to a surprised and delighted Chloe Naylor (13) who scored 76.67% riding Tulira Swallow. Chloe pipped Holly Clarke (13) who finished 2nd on 70.83% with Newoak Truffel.

Jessica de Lucy (12) won the Novice Individual Freestyle Dressage to Music riding Anri Sandstorm for the Tickham Hunt, finishing on a score of 74.69%. Runner-up was Suzannah Offley (15) and Cliffhollins Mystery came second for the Burton Cheshire Forest Hunt on 72.50%. A shocked Jessica, who was competing in Pony Club Dressage to Music for the first time, said: “To win feels unreal; I can’t believe it!”

Holly Clarke was back on the podium after winning the Pairs Freestyle Dressage to Music competition riding Gingerbread VI alongside fellow Meynell Hunt Member Lucy Robinson (18). Lucy rode Johnson Jazz and together they finished on 78.44% – over ten marks clear of East Cheshire’s Mary Goodridge (16) riding Annaghmore Gwenievere and Ciara McLellan (17) riding Ballstra Van De Cumul who took the runner-up spot with 68.13%. Holly and Lucy were amazed to have won. They said: “We’re a new pair as we’ve never competed together, so to come first is such as surprise!”

Paul Thompson’s testing Open Grand Prix course asked all the right questions, and after two rounds just eight riders went through to the jump-off. Victory went to an ecstatic Frankie Carr (16) and Pipsqueek T riding for the West Lancashire County, who was over three seconds faster in the jump off than Katie Waldock-Smith (16) who took 2nd place riding Milo for the Enfield Chace Hunt Branch. Frankie is now aiming to qualify for the Open Show Jumping and Novice Eventing at The Pony Club Championships.

Fran, who has only had Benny’s Boy, or Ben, for three months, said: “It feels amazing to have won; I didn’t think we would even get to The Championships let alone win them!” Fran’s next aim is to be competing with Ben at 1.10m by the end of the year, and qualify for the Dengie Open Grand Prix Championships next year.

Alice Burden (15) clinched the top spot in the Winter Series Show Jumping Championships for the East Hertfordshire Hunt. Alice and Neebro Moonshine went clear in the first round and rode a speedy, clear jump-off to finish in 26.00; just two seconds ahead of Royal Artillery Hunt (S.P.)’s Imogen Crossman (13) who was runner up riding Mac.

“To win feels amazing!” said Alice, “all my hard work has paid off and it was extra special for me because my pony had colitis a year and half ago and has been recovering ever since.”

“I am very excited for a Beach Ride with my Pony Cub later this Spring, as my pony was too ill to go last year,” continued Alice.

Lisa Wilson, Marketing Manager for Dengie, said: “Dengie is extremely proud to have supported The Pony Club Winter Championships for over 20 years. The standard of riding this year was outstanding, and the new Debut Show Jumping class gave less experienced riders a chance to get a taste of competing at a Championship. It was a pleasure to meet the winners, competitors, their families and of course the horses and ponies at the Dengie stand when they came to collect their goody bags or brought their horse or pony over for a nutritional assessment.” Lisa continued to say that Dengie are already looking forward to the 2018 Championships. 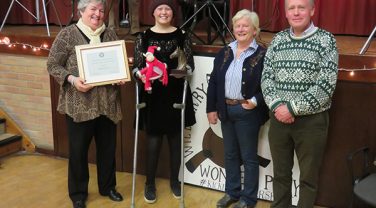 The Hannah Francis Award for Talent, Courage and Inspiration was created to honour Hannah for the bravery she showed throughout her battle with cancer, during which time she founded the Willberry Wonder Pony charity to raise money for bone cancer research and to grant equine wishes to seriously ill people.