The Pony Club Brushes Up Its Image

Posted on 2nd March 2016 and written by Dengie Feeds

The Pony Club, a British organisation with an incredible 86 year heritage in teaching young people to ride and care for horses and ponies, has introduced a fresher, cleaner and brighter version of its brand along with a renewed vision.

Today [Wednesday 2nd March] its annual conference at Aintree Racecourse has heard how the most comprehensive review of the Pony Club since inception had been conducted, in consultation with the organisation’s volunteers and members.

The Pony Club ‘roundel’, most regularly seen on its badge, with tudor rose design and central horse illustration flanked by spokes, is now notably streamlined with a design that depicts what the organisation offers, whilst still ‘tipping its hat’ to the traditions that will always underpin the organisation. The new look is part of a new continuous review.

The Pony Club’s chief executive Pip Kirkby, who was recruited from The Jockey Club, another long-standing British equestrian institution which underwent a modernisation in recent times, comments:

“The Pony Club is an icon of British society. Its timeless values and history are loved by all who are a part of it. At its core, the Pony Club is about young people having fun.

“Refreshing our ‘brand’ allows us to represent ourselves in a more modern way, while respecting our heritage and remembering what makes the Pony Club ‘great’. We need to move forward in order to continue to be inviting to both our current members as well as potential new recruits.

“The review emphasises everything that is wonderful about the Pony Club, our traditions such as camp, our amazing alumni many of whom are household names and our incredible volunteers”.

“We want the refreshed brand to re-introduce the Pony Club to those who know and love what is great about it as well an introducing it to those who are yet to benefit from the fun at rallies and camps, as an integral part of what makes the Pony Club a part of British fabric and society.”

Still a largely volunteer led organisation, The Pony Club is for anyone aged from four to 25 years and including those with and without their own horses and ponies. As well as incredible opportunities for riding and care of horses and ponies, it also offers social development and the chances to make friendships; as well as forming part of the rider pathway up into the Olympic disciplines.

“I have great memories of my time in the Pony Club, where I learnt so much, whilst at the same time having great fun” comments Nicola Wilson, international event rider, Olympic medallist and former Pony Club member. “As an organisation, it is ideally placed to promote the highest ideals of sportsmanship and loyalty, whilst at the same time creating character and self-discipline, which I know has helped me in my career as an event rider. I fully endorse the re-fresh of the Pony Club brand as this will only further strengthen its appeal to the modern day young rider.”

Whilst a refreshed brand is the first phase, the project is part of a much wider membership campaign, that see’s the Pony Club moving forward and repositioning itself to be relevant to both its existing and potential members; the implementation of the Unity database system, also launched at the annual conference, is complementary to this.

Further information about the brand re-fresh, including an asset pack and access to the refreshed logo and word mark can be found at www.pcuk.org/brand 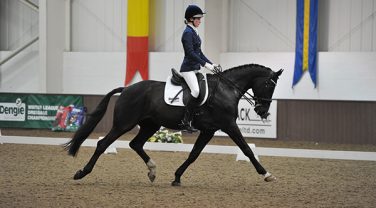 We are devoted to supporting young riders and in doing so hope to help educate them on the importance of a healthy diet for their horses and ponies. This is why we are delighted to announce a new sponsorship deal with young dressage sensation, Matilda Haley.